[quote="jigenbakuda"]Saigo no Kajitsu is another neko song, uhm... has this one been released? I really want to hear it...[/quote]

We all brushed over it at the time, but Saito Neko did the arrangement while Suzuki Shoko composed it. I assume that's why we didn't bother with it because Suzuki Shoko seemed like the most important name on the credits at the time.
http://maayasakamoto.blogspot.com/
Top

And only three songs on the album have lyrics not by Maaya. The way she's been writing recently they should be pretty good.

@Mike, now about that bedsheet banner idea... I think I got a ticket, about 2/3s of the way from the stage but who cares.
Top

^Yaaaaah!!! Or maybe you have a loud enough scream to get the message through?

Yes, its the single before the the last I think. With this this name.
Just try Youtube or the like for an impression.
Its the OP of Tsubasa Tokyo Revelations, the OVAs of TRC
Top 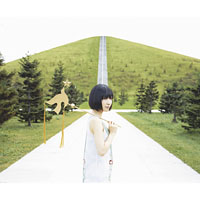 This is the cover!!!! From official site.
Top

I second that. Hope CDJ ships out a poster with Kazeyomi.
Top

thinks triangular gets too much of her, until she becomes somewhat chleopatric..

I've been a good girl and finally put my order in for the regular edition (I don't need a DVD afterall). The exchange rate is hideous at the moment. £20 for a cd??!? And that's with 600yen discount 0_0 awful! At least I'm supporting my beautiful Maaya-chan.
http://maayasakamoto.blogspot.com/
Top

the cover looks bright.. i like it!!
but i'm not too sure about maaya's expression there.. why i think she should be happier.. ??
bigger cover certainly needed ><

kai!! if u better practice that long throw sport game.. try to throw a flower to her...

and If u'r lucky u might be back in one piece.. hehe,, just kidding there..
just close your eyes and follow your HEART --> vanished to dust T.
Top

thats what i was thinking when i placed my order.
ugh...god its soo much money right now!
but im a trooper. i havent made any orders in a while now, so i used all my saved up points, and my coupon, and i ordered kazeyomi cd+dvd and love's confetti love songs cd+dvd.

and it still put a HUGE dent in my wallet.
im really hoping itll be worth it!

Oh my word!! I'm glad I placed the order a couple of days ago, it's 137 yen to the pound now. That's insanely low :odd: when I was in Japan last year it went up to 220yen to a pound at one point. It's all about watching the rate everyday to get the best deal at the moment, eh?

EDIT: by the way, there's a new promo picture from the album cover shoot at CDJapan's page for preorders:

...so which one is the official cover?

EDIT: Pippa - I think you will still be affected by the exchange rate... most sites charge you only on the day the item ships, don't they?
A Gabriela Robin Site
Top

The one on her official site is the official cover. I think the CDJapan one is just a regular promotional image.

I paid by Paypal so if they charge me again when it ships I'll be really annoyed!!
http://maayasakamoto.blogspot.com/
Top

That bird thing shes holding makes me think of a wand, Magical Girl Maaya!
This is a terrible time to change money, last year you could get 90yen to $1nz. Now its almost half that. And I didn't notice that you can pay with paypal at CDJ. I was thinking of buying Kazeyomi over there but I doubt I could get the limited edition so I ordered from CDJ.
Top
Post Reply
241 posts