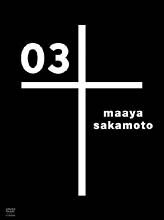 I encourage you to buy the movie too ^^

Wtf is up with the very end XD It's like they gave up...
Top

Maybe they ran out of money XD
http://maayasakamoto.blogspot.com/
Top

The first time i watched it i was really confused, but then i came to appreciate the scenarios and the feelings that were not told.

Its a good movie!!

Have anyone still keep the .srt files for 03 cross? the translation for the video. (264.102 Mb Avi build) I thought I wanna rewatch it with translation, keke

> Me back listening to Hyper Yocomix audio-pack from Yoko Ishida, kinda liked the one from Gravion and Noir theme song. Sleeping soon.
Mumu Alpaka Tumblr
Top

Is this the right thread? For discussing the movie, that is... I did a search and I think this is the only thread like this!

Cause I finally watched it. XD

I didn't have the translation file but I understood most of it anyway. I liked it a lot! Crow-Maaya was cool. What's that kid have against black/all colors? I liked trying to see if I could recognize Tokyo landmarks/figure out where he was. For the most part, no. But that train he was watching was the Yamanote Line.

I went and read the translation of "03" again to see if I could understand the lyrics more now that I'd seen the movie, but I don't think there's any real connection... o_o

Anyone have an opinion on what "03" is? Was she the third crow he killed, or something? I don't think so, but I don't know what else it could be... hmm...
Nostalgic Lavender// Maaya Sakamoto Translations
Top

I thought I was the only one who liked this movie! Last year, I finally gave up trying to find any kind of synopsis or summary or anything and just bought it. I LOVE it. Definately worth buying - the DVD case glows in the dark. XD I've taken a LOAD of screenshots and I'm hoping to make a website for it, someday. XP Wee!
-Janko Raven-
Top

I just thought maaya represented everything that he resented/hated but she made him re-evaluate why he hated those things and that's why she scared him so much..I don't know though D:
If you have any poo, better fling it now.
Top
Post Reply
9 posts • Page 1 of 1